We can’t remember the last time we enjoyed popular history as much as American Bloomsbury, Susan Cheever’s smart, dishy romp through the intersecting personal lives of a cluster of geniuses who all lived in Concord, Massachusetts, in the mid-1800s.

The Concord gang transformed not only American literature and culture, they transformed each other, seducing one another — both intellectually and physically. For starters, Alcott was in love with both older man Thoreau and then much older man Emerson, while Emerson exchanged love letters with Fuller, though handsome Hawthorne (“a rat with women,” according to Cheever) also enthralled her.

All of these characters have, of course, been subject to countless biographies. But Cheever’s deft chronicling of their interwoven lives and her heavy quotation of overheated excerpts from private writings (“On his lips is the perfumed honey of Hymettus,” Fuller wrote of Emerson, “but we can only sip”) make this slim volume an unexpected delight. 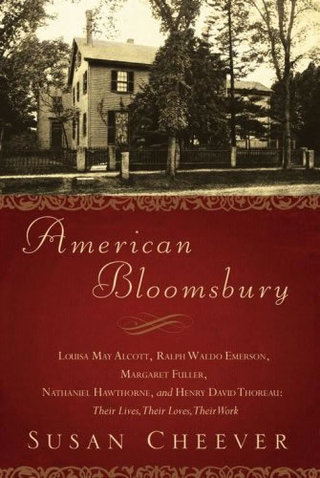 It was a privilege to write about these great men and women, and a thrill to discover their private lives. The book begins when the Alcotts move to Concord in 1840,and ends in 1868 when Louisa May Alcott reluctantly sat down to write Little Women. It explores the variety of intimacies between these Concord residents and by adding the women in the community into the story, it changes the story. It asks the question: how did so much great literature come to be written in a few houses over a few years?