As Good as I Could Be

I am just about to publish a book about raising my two children titled As Good as I Could Be: How to Raise Wonderful Children in a Difficult World which will appear in May of 2001. Essentially it's a memoir about the adventure of raising children in our fragmented and crazy world. My kids -- a daughter who is now a Freshman at Princeton, and a ten-year-old son -- didn't have many of the things that kids are supposed to have -- family stability, money, consistency -- yet they are fabulous, wonderful children. In thinking about how that happened -- what it was they did have that helped them so much -- I began to think about writing this book. I have also been writing a column about raising my children in Newsday for eight years now, so I had a wonderful record of our lives together to draw on.

What motivated you to write it?

Much of my writing begins with a question. In answering the question, I find myself planning a book. I wanted to know what it was about the way I raised my children that worked so well. I was curious about the ease with which we all stayed friends throughout their different phases. In each book I have written, I have changed. Each book is a journey for me as well as for the reader.

How long did you spend writing it?

Writing a book takes me from one to five years. In this case I had been working on the material for eight years as a columnist. It took me a year to write the book itself.

What was the most challenging aspect of the research/writing?

It was hard to find the right voice. I wanted to be lighthearted about child-raising, but I didn't want to diminish the seriousness of the subject. I also felt very strongly that I had to be honest. So much of what has been written about raising children is painted in an unrealistically rosy light. That artificial reality isolates parents and makes them feel inadequate. It was hard to be honest, though. I love my children passionately and I wanted to forget that there had ever been any friction between us.

What other books would you recommend to someone who likes this one, or who is interested in its subject matter? 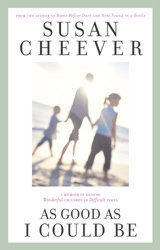